A day in the life of a kale leaf

Do you ever just wonder what an average day looks like for a girl like me? Well same. So I wrote about it. Just for you:)

Morning stuff is kinda boring so I'm gonna race through it...

My first class starts at 7:40 unless I have a late start and I have 1-4 classes per day. Everyday in a two week span is different and then it repeats. It's pretty confusing but I like it because I get to do something different everyday. I only go to my classes one or two times a week except English which I have two or three.

Today I had English, Deutsch, geography, and math. Lucky for me my Deutsch class got cancelled which oddly happens a lot here. In English I participated in the class discussion for the obvious reason that the entire class is taught in my native language. It's actually an interesting class for me because we're not really learning English but rather learning IN English. The topic the class is discussing is globalization. Everyone in the class chose English as one of their two leistungskurses which are the classes you take the most of and are most interested in. At the end of the semester they will write a paper on globalization and we will move onto the American Dream. Lucky for my class they have a real life American in their class who failed their AP U.S. History exam just last Spring *thumbs up*(I'm only slightly bitter).

As I have mentioned before, school isn't filled with much math, geography, music, or religion learning for me. Right now it's a way for me to learn German. Listening to German all day is kinda boring so I find myself doing a lot of doodles in class. I took some pictures of my doodles so far because I know you're interested. 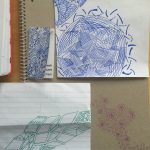 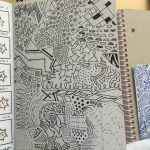 In geography I studied some German verbs (sounds fun I know) and after went home for  lunch. Then came my favorite class. Math. With my favorite teacher. Herr Welder. Now if you knew me you would know that I'm not a big fan of math but now let's put that math in German and make it math I've never learned before with a teacher that is certain I'm going to magically understand. Today he started talking to me rapid fire in German (like always) and when I didn't understand turned to his favorite translator in the first row of the class. She then turned to me and said "Have you practiced any calculus? Do you understand now?" HA! Herr Welder you are a funny man. I did not in fact go home and study my calculus book in German so I could show off my mad math skills to you today. Didn't make the priority list sorry, maybe next time. Or never.

After he was done with me I turned back to my math notes and pretended to be busy. I wrote a bunch of awesome notes to myself which I know you want to read so here they are.

Here is me doing bad math calculating how many seconds I had left in that dreadful class then I wrote some awesome insightful notes about it:)

End of school bell rang and I booked it out of there. Now I'm home blogging like the blogger I am and am headed to soccer practice soon. Oh wait she's playing soccer in Germany? Who knew?! More about that soon...

p.s. I spelled calculus right the first time, go me

Oh, Kaeleigh, you are a good sport! I love it that you are finding ways to have fun even in Calculus class! Well, “fun” may be a bit of a stretch! Your doodles are getting really good. Maybe you can start publishing adult coloring books. Who knew we would ever be having a conversation about adult coloring books! I will tell you my toe story just so you can know you are not the only one suffering. Monday morning, August 21st at approximately 9:54.33, Grandpa was moving the RV “slide out room” back into position so we could leave Missoula, Montana and drive to Katie and Jeremy Sayres (your cousins) in Bozeman, MT. Well, I knew this was happening but decided I could reach my phone charger which was plugged into the outside wall of the moving room. Next thing I knew (and Grandpa knew immediately too because I was yelling “STOP”) my big toe on my left foot was caught and mangled under the edge of the slide. Major ouchie!! So since then I have been soaking, bandaging, protecting and praying over my toe. I can’t wear shoes yet and the options I have are the flip flops I was wearing when it happened (ick) and one other pair that are fairly comfortable. It is actually healing quite nicely and we are not sure if I will lose the toenail or not. Funny thing is, it did not even mess with my pedicure (my famous purple color I am known for)!!! So even your bike riding makes me envious:) I may actually try riding today. I need the exercise and the Farm Stand up the road is open on Thursday afternoons. Love you, Kaeleigh!! Grandma

Oh no! That’s terrible! Biking should make you feel better and farm stands are always a good idea:) I’ll keep on doodling and we’ll see where I end up;)